After 203 posts, I'm starting to forget what I've posted, so maybe this is a repeat, but I don't think I've posted this graph yet. 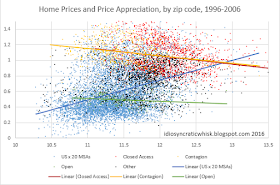 The x-axis is the median log home price of a zip code in 1996.  The y-axis is the log change in the median home price of that zip code from 1996 to 2006.  I have divided the top 20 MSAs into 4 groups: Closed Access (NYC, LA, Boston, SF, SD), Contagion (Miami, Riverside, Phoenix, Tampa), Open Access (Dallas, Houston, Atlanta), and Other (Chicago, Philadelphia, etc.).  The blue dots are zip codes outside those 20 MSAs. (Data from Zillow.)

During the boom, in the aggregate, it was the highest priced homes that appreciated the most.  (There is a clear upward slope to the cloud of dots.)  But, within each MSA - even within each MSA type, as I have classified them - there is a slight negative slope.  That negative slope is basically what Mian & Sufi noticed, because in their analysis they controlled for the differences between the MSAs.

Unfortunately, this has led to a widespread and passionately held notion that the lenders did this to us - as if the entire boom was defined by the difference between the low priced zip codes in Los Angeles vs. the high priced zip codes in Los Angeles.  But, clearly we can see that if you wanted to guess how much a home's price appreciated during the boom, the most important fact would be what MSA it was located in.  How high priced or credit-constrained the zip code was, within that MSA, would be a much less important fact.

The difference between MSAs comes down to supply elasticity.

Even considering that difference between high and low tier prices within each market, lending was facilitating the bidding war into limited access cities.  The demand for housing in those cities would naturally be focused on the lower tier portions of the local market, where aspirational newcomers would be bidding for access.

What's interesting is that there are two separate inputs into the general consensus about the period that I think lead people astray.  First, by looking at the national market, and ignoring local differences, a consensus developed that price appreciation was unrelated to rent appreciation, and, so, was apparently irrational.  But, if we look at the MSA level, price appreciation is highly correlated to persistent rent inflation.

But, then, building on this notion of irrational price markets, Mian & Sufi fingered credit supply as the cause of the price appreciation.  Yet, here, their causation came from only looking at local changes and not looking at national aggregates.

These were two errors in opposite directions, combined to create a single narrative that aggressive lending led to rising prices.  Between these two errors is the truth, that the explanations for the period come from looking at the differences between MSAs, not from looking within each MSA or mashing them all together into one aggregate. 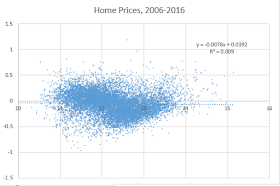 Home prices since 2006 have taken on a sort of V-shape.  In the bottom tier of the national housing market, which is largely non-urban, where supply acts as if it is elastic mainly because there isn't that much marginal demand, prices rise without much volatility in both periods.  In the middle tier of the national housing market, which is mostly aspirational regional urban housing and the lower tier of Closed Access cities, where middle class households take on some extra costs to tap into income opportunities in many cities, credit constraints are a factor, so the dislocations we have imposed on the mortgage market have dried up effective demand in these zip codes, killing market values.  The top tier of the national housing market, which is supply constrained, but isn't so credit constrained, has faired better, though, of course, in a just world without supply constraints those homes would have market values at a fraction of their current prices.
Kevin Erdmann at 9:50 PM
Share